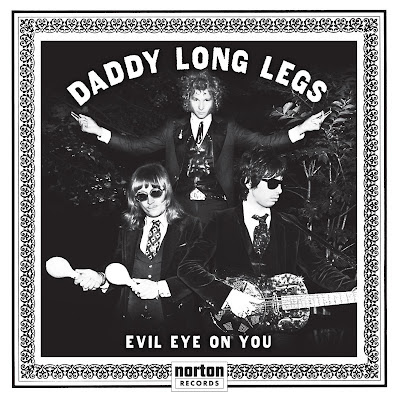 Dig it on fabulous footlong LP and pocket size compact disc, too!

Daddy Long Legs, the aforementioned wailer, is joined by slide-guitar  driving Murat Aktürk (born in Ankara, Turkey) and legendary NYC trap master Josh Styles, who attacks his kit with a whip and a maraca, although not necessarily in that order.

The  trio has taken the music scene by storm, with alarms sounding throughout the East Coast and reverberating across the globe, as they cut through the mediocrity, directly into the meat of real music—from the hip and to the heart.

Within a few short months, DADDY LONG LEGS has taken to stages with the likes of the Sonics, the Flamin’ Groovies, the Hoodoo Gurus, Lenny Kaye, Andy Shernoff, the Legendary Stardust Cowboy, and Question Mark And The Mysterians. They have burned down barrelhouse backrooms, afterhours nightspots, and legendary locations like the famed Friars Club, NYC.

Their rapid rise in popularity is based in their total lack of pretense-- all three young men are seriously dredged in deep blues baconfat, seasoned, seared, scored and tempered...and baptized in hotwired wine and brine.

Their first Norton single, a raw reading of the Rolling Stones Cocksucker Blues, coupled with The Under Assistant West Coast Promotional Man recorded with Andy Shernoff at the helm and at the microphone, brought them to the forefront of the local scene, even catching the ear of  Chicago R&B legend T Valentine, who promptly tapped the trio as his band both onstage and in the studio. A much-awaited combined effort, THE VAMPIRE, is due for release in November.

DADDY LONG LEGS presents here their debut full-length Norton label offering, EVIL EYE ON YOU, a showcase of the trio’s finest original proclamations, set in a sparse black and white selection that is meaty beyond definition.

DADDY LONG LEGS is currently on tour in the US, with an overseas itinerary in the works.

Keep your evil ear on DADDY LONG LEGS. Else they put the EVIL EYE ON YOU.

Stay tuned for early November release of THE VAMPIRE, the new album by Chicago legend T. Valentine with all backing from DADDY LONG LEGS -- insane and unstoppable...get ready for one heckuva blues blast breakdown!

Exclusive Downloads on Itunes! Get it here! 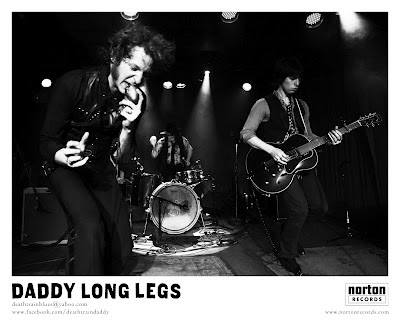 WHAT THEY'RE SAYING ABOUT... DADDY LONG LEGS

"Daddy Long Legs is a man. A tall man. A tall, well-dressed, imposing man who blows the harmonica as if breathing life and soul into Delta bluesmen long dead… DADDY LONG LEGS, a trio of characters forging rock n' roll spectacle for the eyes and ears, hearkening back to when troubadours drank moonshine and took their role as entertainers more seriously."
- TheDeli NYC

“Hands down Daddy Long Legs is the best blues harmonica player this writer has ever seen or heard. His playing is so pummeling and soulful it just saws you in half.”
- The Deli NYC Magazine

''In addition to a deliciously unhealthy dose of harmonica, this Brooklyn trio’s electrifying backwater blues is rounded out by primal drums and guitar, which leaves room for singer Daddy Long Legs to belt out his musical sermon.''
- The Most Interesting Academy Dos Equis

Check out the racket about Daddy Long Legs!