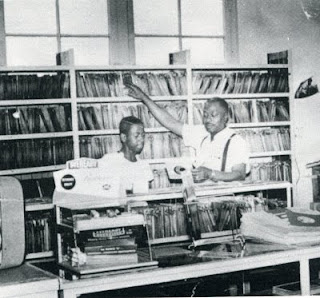 Attention Nortonians! All new releases are ready to roll! We are busy pickin' and packin' so get on board with a landslide of new Norton monsters! Pick up two fabulous volumes of Kim Fowley's earliest, wildest and rarest recordings on posh gatefold LP format or CD, three LP's and CD's of early, rare, and unissued Sun Ra vocal group and R&B superbity (plus an astonishing seven inch Sun Ra never ished, spoken word monster with boss sleeve), two esential Flamin Groovies LPs, Andre Williams' amazing and fabulous fiction book SWEETS, seven inchers from Jackie and the Cedrics, the A-Bones, and introducing the Tandoori Knights... and so much more. These babies spell ACTION! As a matter of fact, Patti Smith has already covered The Second Stop Is Jupiter from our Sun Ra series - less than two weeks after the release! Grab 'em all up quick, and see you round town and elsewhere at some of these upcoming blasts! And double click the links for extra added bang-zoom! 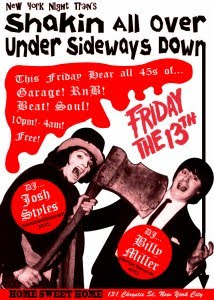 Friday Nov 13 Join DJs BILLY MILLER and JOSH STYLES as they pinch hit for the globetrotting Jonathan Toubin spinning a bucketload of frantic 45s for your dancing pleasure! We hope to see all you non-superstitious types at the party, besides, most of the platters will wail in the wee hours of the 14th anyway. Home Sweet Home 131 Chrystie Street, NYC 10PM – 4AM

Saturday Nov 14 ANDRE WILLIAMS: Paperback Writer! If you’re lucky enough to be in the Chicago area, come on over to Phyllis’ Musical Inn at 1800 West Division round about 8 PM when festivities kick in celebrating Andre Williams’ first work of fiction, in paperback- SWEETS! Andre will read, rally, and respond to questions from the peanut gallery, followed by an all-Andre DJ blast with John “Mr Wiggles” Phillips. Pick up the book, get it autographed and shake a tail feather with Andre and fans! See why Nick Tosches says, "Andre Williams is a real, natural-born, blown-in-the-glass writer, the kind they hardly ever make anymore."

Monday Nov 16 ANDY SHERNOFF tells all!
Our good pal Dictators whiz kid Andy Shernoff is doing a series of solo shows at the Lakeside Lounge presenting his genius songs in an acoustic setting. Whatever happened to “country rock is on the wane/I don’t want music/I want pain”? Last week’s show was great with Andy dipping deep into his catalog of hits and telling hilarious and heartfelt stories about Andre Williams, Joey Ramone and Nazareth! It’s like Ray Davies with a White Castle slant. Every other Monday night for a spell until the management catches on. Lakeside Lounge, 162 Avenue B, NYC

Thursday Nov 19 REIGNING SOUND/A-BONES
Maxwell’s, Hoboken, NJ A surefire swing ding with the Reigning Sound blowing into town supporting their new In The Red LP LOVE AND CURSES (RS will be at Southpaw on Friday). The A-Bones Norton LP NOT NOW is at number six at WFMU this month – thanks to all the boss jocks for the spins! Maxwell's, 1039 Washington Street, Hoboken NJ
A-Bones Myspace!

"To A-Bones, one connait the classics! Not nothing Miriam Linna the threshing machine, and his singer of husband, Billy Miller, president also in Norton's destinies, quality-label quality of which they will never rent enough. And having respectfully plagiarized the case of the first album US of Yardbirds, it is today in the turn of the Rolling Stones of 65 to be the victims very honoured by a misappropriation also class that visually improves. Musically, this abounds, and far, consequently, of the rockabilly of the beginning, A-Bones re-visits with an infectious delight of the whole sections of the rock of the loving years. Exhume Animals (Outcast), revive Kinks (Stolen Moments), take back Max Lipscomb (Bad Times) and make, generally, fifteen titles of the album a party which does not finish it. « Geraldine ", " the Rooster "or " He Sure Could Hypnotize », are worth displacement in themselves. Their big return after a station wagon of more than 10 years. Shaped by Matt Verta-Ray and helped by the keyboards of Irish Republican Army Kaplan, far here by the indie-rock of Yo La Tengo, " Not Now! " the album improved for the gambille, fraiche beer and dislocations of the hips is. They greet their come-back! (A.F)."

FLAMIN GROOVIES ICONIC ALBUMS NOW ON WAX ON NORTON! The Flamin Groovies FLAMINGO and TEENAGE HEAD on blazing vinyl foot longs like they're supposed to be! Dig Roy, Cyril, George, Tim and Danny on two bona fide rock n’ roll masterpieces! Big, bold sound from master tapes, original covers (yes, including the gatefold FLAMINGO!!!) and all the killer tunes that you high flyin’ babies out there demand! 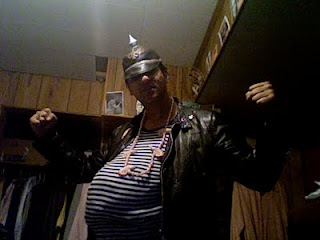 King Khan & BBQ/Tandoori Knights! Be sure to catch Montreal’s answer to Homer and Jethro on their lengthy North American tour plugging their latest wax INVISIBLE GIRL on In The Red Records – they really tore it up here in Brooklyn! Stay tuned for some amazing new songs that BBQ recorded with Bloodshot Bill plus Khan and Bloodshot’s spicy Tandoori Knights album coming soon…all on Norton! (PS Above, that's a pic of Bloodshot Bill as King Khan for Halloween 2009!) 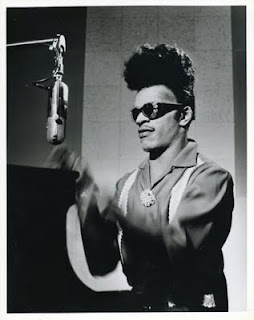 VA VA VA VOOLA! Our pal Jim Marshall (“The Cold Blooded Hound” as the late great Hank Ballard called him) has posted a wiggy trib to our hero, the mighty Esquerita! Dig it and all the cool tales around Hound Town!
Hound Blog!


ICHIBAN RADIO!
Debbie D. Does Dallas and all points any old which-a-way! With archived WFMU broadcasts of Music To Spazz By, Fool’s Paradise and Downtown Soulville plus pots of good vittles! Dig Debbie D and pals at ICHIBAN RADIO!

PONDEROSA STOMP: THE MOVIE!
Dig this short film featuring Roy Head, Lil’ Buck and Classie Ballou, packed chock full of reasons to love the Ponderosa Stomp and all it stands for- without it, we’s lost! Support The Stomp! Ponderosa Stomp website!


Meanwhile, backstage at Nortonville... we’ve been digging deep into the bowels of the bat cave, keeping midnight hours to add a massive stash of non-Norton inventory to our website – thanks for your patience- it will be worth the wait!

It was great to meet and greet with everyone at the WFMU Record Fair. Thanks to all for your continued Norton support! On Tuesday November 17-18, the station is holding a fundraiser marathon – do what you can to help them out if you wanna continue to dig all our kindsa sounds. Remember, WFMU stands for We’re Friends of Mr. Uszniewicz!
WFMU.org!

YOU CAN RUN BUT YOU CANNOT HIDE DEPT. We’ve been hauled into various new situations on the internet, most recently, FACEBOOK. Unbeknownst to Billy and myself, a zealous unknown Norton fan from a friendly foreign land has been operating a facebook page for Norton for a couple of years now. Thanks very much to the eager boy who has kindly now allowed us access, so if you really really really can’t phone, teletype, wire, or send a singing telegram, feel free to attempt contact via the smoke and mirrors of Facebook, or the mirage of Myspace or the ballyhoo of Blogspot. To quote the Temps,
Great Googamooga/ Can't you hear me talking to you/ Just a Ball Of Confusion...