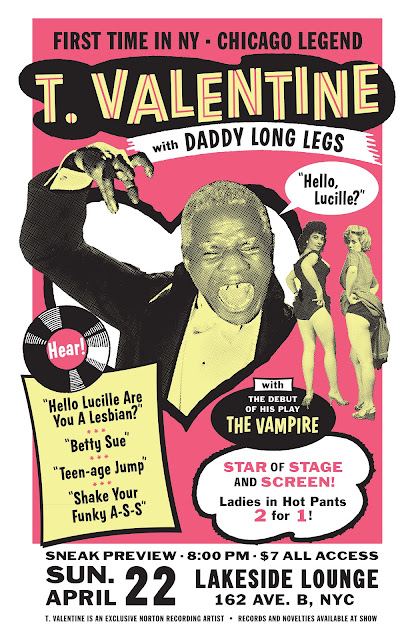 Chicago music legend T. Valentine descends upon New York City for the first time in 79 years-- and grabs the hottest young rockers in town-- DADDY LONG LEGS-- to back him as he delivers his cult classics HELLO LUCILLE ARE YOU A LESBIAN, TEEN-AGE JUMP, BETTY SUE and more! VAL, as members of his fan club refer to the sensational septuagenarian, will also present, for the first time in New York City history, his VAMPIRE PLAY, in tribute to the death centennial of DRACULA genius BRAM STOKER!


CALENDAR OF EVENTS APRIL 19-24
Thursday, April 19, 9PM
Music To Spazz By with Dave The Spazz (wfmu.org)
Debut of upcoming  ESQUERITA album SINNER MAN plus Billy will be spinning loads of crazed rock n’ roll 45s!
Saturday April 21, 1PM
Fool’s Paradise with Rex (wfmu.org)
The award winning FOOLS PARADISE radio program with REX will host an in-person radio interview with T. VALENTINE at WFMU on Saturday, April 21. Tune in at 91.1 FM or online at wfmu.org 1-3 PM -- T. Val will be stopping in during the show for a chat n' chew.
Sunday April 22 8 PM
T VALENTINE AND DADDY LONGLEGS
AT THE LAKESIDE LOUNGE

162 AVE B  NYC
$7 ALL ACCESS
T. Valentine may be spotted taking in the town as he makes his way on Sunday to the LAKESIDE LOUNGE, where he will treat an elite audience to a full-on sneak preview of the VAMPIRE PLAY and will perform with the amazing DADDY LONG LEGS, who will also exact a wailing set of their own. T VALENTINE will be available for a meet-and-greet autograph session his records, commemorative novelties and posters. Sadly, this will be the last Lakeside performance for all concerned, as news has just broken that the NYC fixture is shuttering its doors at the end of the month.
An exclusive Tuesday night showing at a private local show will include NICK TOSCHES  as Master of Ceremonies. This event is not open to the general public. So don't miss him at the Lakeside!
Please enjoy these exciting fan posts at Youtube!

T VALENTINE BIO BY MR WIGGLES
Exacted from the T Valentine myspace  which is extracted from the supreme biographical essay by Nick Tosches, presented on the T. Valentine album T VALENTINE - HELLO LUCILLE... ARE YOU A LESBIAN? (Norton 280)


Thurmon Valentine was born in West Helena, Arkansas in 1932. Inspired by Sonny Boy Williamson's "King Biscuit Time" show on KKFA, Thurmon moved to Chicago in 1950 to make music and become a performer. From 1957 to 1959 he created and performed a live show called "The Vampire" in clubs with three female co-stars out of his love for "old vampire pictures, Lugosi and all those guys." He met up with Detroit Junior of the Cadillac Baby Show Lounge at 4708 Dearborn Street in Chicago. Detroit Junior had a small record company called Bea & Baby and released T. Valentine's first hot singles around 1960. Soon afterwards T. Valentine started his own label VAL Records in 1962. From there he released his own singles "Do the Do" and "Betty Sue," and both of his versions of "Black Power," as well as recordings from other artists. After divorcing his wife Lucille he decided to get back at her by recording the song "Lucille Are You A Lesbian," inspired by Josie Cotton's "Johnny Are You Queer." Val Records pressed 200 copies. It has become a rare and sought out 45. Most likely Lucille never heard it, but the song has become a cult favorite among lesbians.
Trivia: The phone number he uses in the song when he calls Lucille was the number for his Chicago-based label, VAL Records.
Influences:
Lesbians, Sonny Boy Williamson, lesbians, Sonny Liston, Stokely Carmichael, Bela Lugosi, lesbians

Greetings once again, Nortonians, as we prepare for lift off at the newly stoked Norton Records website. We've just added scads of tuff to git wax of all sizes, speeds and persuasions, plus there's loads of insane old stuff- Mexican movie posters from the archives.. plus Fang DVD's and lot lot more. So dig in! We have some major new stuff happening at Nortonville, so read on.... 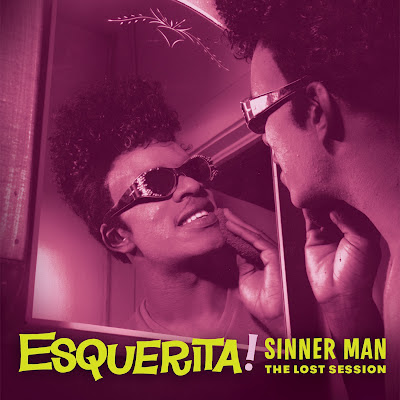 
(ED-381) Ten unissued selections from a long lost June 1966 NYC session showcase Esquerita pounding it out on piano and organ, flashing back and forth between the two during each song, accompanied only by a fantastic drummer! Dig the over the top nine minute gospel wailin’ title track (based on Nina Simone’s version but delivered at super Voola velocity) that’s worth the price of admission alone! STAGGERING! Sinner Man #1/Hittin’ On Nothing#1/ C.C. Rider/Leave Me Alone#1/ Letter Full Of Tears/ Hittin’ On Nothing #2/On Broadway/Nobody Knows You When You’re Down And Out/Leave Me Alone #2/Sinner Man #2 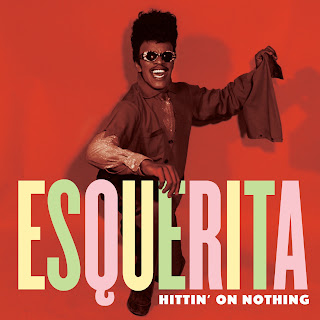 ESQUERITA – HITTIN’ ON NOTHING/
LETTER FULL OF TEARS 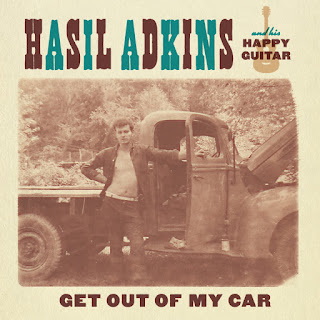 HASIL ADKINS AND HIS HAPPY GUITAR
GET OUT OF MY CAR/ SHAKE THAT THING
(45-168) Hunch that thing with the world’s greatest one man band!
Two mon﻿strous chicken walkin’ hits on one platter! 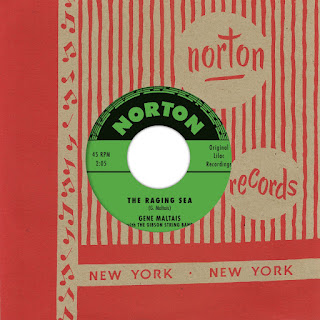 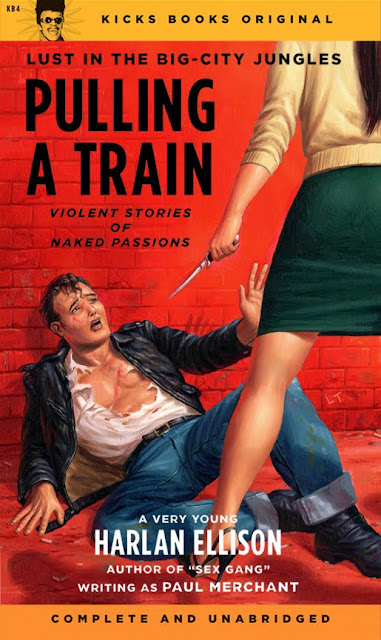 HARLAN ELLISON - GETTING IN THE WIND (KB6)

Top hero icon Harlan Ellison joins Andre Williams, Sun Ra, and Nick Tosches at KICKS BOOKS, exploding from the launching pad with a inseparable pair of JD paperbacks that is sure to rearrange your furniture. The king of brain-sprain sci-fi future-bop finally reclaims the throne as the unadulterated boss cat of juvenile delinquent badass fiction with a set of his mega-rarest dark tales that have been unavailable anywhere for fifty years. Do you know the story? You will very, very soon, as Harlan has written massive introductions to both tomes which unravel the mystery behind his most elusive and mind-rending works! The full blast comes at you at kicksbooks.com within a fortnight.. meanwhile, start sweatin'! Dig PULLING A TRAIN by Harlan Ellison (KB4) followed by his superb twin-spin GETTING IN THE WIND (KB6)-- both books will also be available as limited signed versions in presentation boxes for you collector beasts and beastesses.

Naturally, as with all books in the Kicks paperback line, a sidekick perfume has been formulated, street-tested, bottled and packaged. SEX GANG is the heady scent that tells the world OFF! Exclusive, limited, and totally dangerous. Stay tuned at kicksbooks.com!

HOT OFF THE BLOTTER.... T. Valentine of "Hello Lucille" and "Betty Sue" fame is destined for exclusive April appearances in New York City... that's all we can say right now... more as it develops...Norton is working in conjunction with X-Bat Records on an entire LP on rockabilly king Don Ellis (a/k/a Harold Shutters) featuring wicked sides like Rock And Roll Mr. Moon, Bunny Honey, Come In World, Blue Fire – complete with detailed liners and cool pics! Norton has also assembled WOLFE CITY MADNESS: TWISTED HILLBILLY BOP FROM THE VAULTS OF WOLF-TEX RECORDS, the first ever roundup of singles, unissued sides and radio broadcasts from the Texas waxery best know for Harold Montgomery’s immortal rocker How Much Do You Miss Me. Our long promised EL PASO ROCK VOLUMES 4-9 are finally in the pipeline as well - nearly 100 Southwest pulse pumpers, many issued for the first time from master tapes! Fifties rockers, surf instrumentals, guitar killers...sure to fill in the gaps in the the El Paso area story... which funnels down into the upcoming big book from Kicks Books, I FOUGHT THE LAW: THE AUTHORIZED BIOGRAPHY OF BOBBY FULLER... we have a solid batch of singles brewing, too...watch for updates... EDUCATION DEPARTMENT… Dig what they're sayin' ABOUT ... KICKSVILLE CONFIDENTIAL... see you on SATURDAY, MARCH 24 at the ALLENTOWN RECORD SHOW... join the feeding frenzy at the 26th semi-annual Allentown 45 and 78 show... we’ll be bringing lots of rockers, R&B, doo wop, instrumentals, garage sounds and more, so stop by the Norton Records table and grab up some maulers, crawlers and bawlers!... that's about it for the moment... see you at nortonrecords.com....