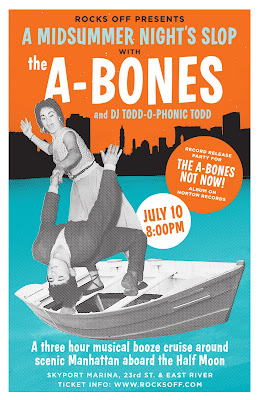 Friday, July 10, join the A-Bones on a Midsummer Night Slop with a booze krooze around Manhattan! Take a three hour cruise (with Lars as the Skipper) in celebration of the release of the Norton album THE A-BONES, NOT NOW! The A-Bones will perform all your favorites (they better be your favorites - you can't leave!) and DJ Todd-O-Phonic Todd will rock the boat as only he can! Booze! Food! Rock And Roll! The Statue Of Liberty!! We set sail on the Half Moon at 8PM on July 10 from the Skyport Marina at East 23 Street and FDR Drive. Don't miss this rollicking three chord adventure on the high seas!
http://www.rocksoff.com

THE A-BONES, NOT NOW! will be available to landlubbers on July 14, wherever records are sold.

This week on National Public Radio, you can tune in to the A-Bones backing the legendary Ray Sharpe, recorded live last April at the Ponderosa Stomp in New Orleans.

Be sure to dig Roy Loney and Cyril Jordan of the Flamin Groovies backed by the A-Bones appearing at Maxwell's on July 23 and then they'll all be headin' for the Brooklyn border at blasting forth at Southpaw on July 24. The A-Bones will also perform a separate set both nights and the Southpaw show will also feature the mighty Underthings. Tickets are flyin' fast so act pronto!
Thursday, July 23 Maxwells

Advance copies of the A-Bones tour single Shallow Grave/Rockin' Satellite will be available at the July 23 and 24 shows.

Coming this month - THE NORTON HOUSE OF WAX podcast with your host Miriam and a bash bevy of super special guest stars! Stay tuned!